Csound is an audio software and programming language for sound synthesis and composition. It was developed by Barry Vercoe at MIT Media Lab in 1986, but its roots go all the way back to the Music III Software developed by Max Matthews in 1961.

Today Csound is developed by a group of core developers with a wider community of volunteers contributing. One of the main principles in Csound development is to guarantee backwards compatibility. You can still run Csound source files from 1986 on the latest Csound release.

Although Csound has a strong tradition as a tool for composing electro-acoustic pieces and traditionally has been used in a non-interactive score driven context, nowadays it is mostly used in a real-time context. Csound can run on various different hardware and software platforms including all major operating systems as well as Android and iOS. Csound can also be called through other programming languages such as Python, Lua, C/C++, Java, etc. and is now also supported on the Bela platform!

Csound documents are simple text documents starting with the XML type tag <CsoundSynthesizer> and are then structured into 3 sections: <CsOptions>, <CsInstruments> and <CsScore>

Each section of Csound code has its on syntax and grammar. The first couple of lines in <CsOptions> are mainly some hardware/software settings, which for now we can ignore.

Where the fun starts is in the <CsInstruments> section with defining instruments (or setting up patches). An new instrument is defined between the instr and endin lines (see example below). Instruments are built by combining signal processing modules which are called opcodes in Csound. There are thousands of opcodes available for different kinds of oscillators, filters, envelopes, delays, reverbs, sample manipulation tools and so on. The Csound Reference Manual provides more information and examples for each available opcode.

Here we will start right into writing a first simple instrument which uses a pink noise generator, a simple sine oscillator, two LFOs and an opcode for stereo panning. The output of an opcode is assigned to a variable e.g. aNoise is the holder for the audio signal generated by the pinker opcode. Here, Csound has specific variable types for the data to hold. The first letter of a variable name sets the type, in this case aNoise expects an a-rate (audio) signal. Other types you will often find are k-rate (control rate) signals, that are updated less frequently to save computing power and i-rate signals which can only be set once, when the instrument is instantiated.

In the CsScore section instruments can be called by their name or number. In this case instr 1 is called 4 times with different settings for p4 and p5. This is the most straight forward way to run instruments, although other options like triggering by MIDI events and triggering live-events from within other instruments is worth to check out.

The idea to run Csound on the Bela Board came from the COSMO-project (Csound On Stage: Music Operator), which is a project devoted to making hardware- and software frameworks for making embedded standalone Csound instruments to use on stage. The COSMO team originally worked with Raspberry-Pi’s but that always required some custom hardware, for better sound quality, adequate latency, and individual controller inputs. All these hardware requirements are already met by the Bela boards, so it was only a matter to bring Csound onto the Bela platform. A small team, namely Bernt Isak Wærstad, Victor Lazzarini and Alex Hofmann started to work on this project in Autumn 2017 and a first release of BelaCsound was pubished in July 2018. 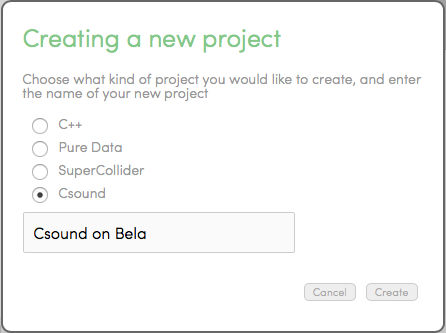 Bela comes with a very nice browser based IDE which makes developing and setting up a Bela with Csound extremely easy. To get started, you simply click “Create new project”, select Csound as project type and type in your desired name for the project.

This will automatically create a default example project which introduces some key concepts like how to read in values from the analog pins and how to turn an LED on and off. Other and more advanced concepts can be explored in the Examples section under Csound

See https://github.com/BelaPlatform/Bela/wiki/Getting-started-with-Bela for an introduction on how to install necessary drivers and accessing the IDE 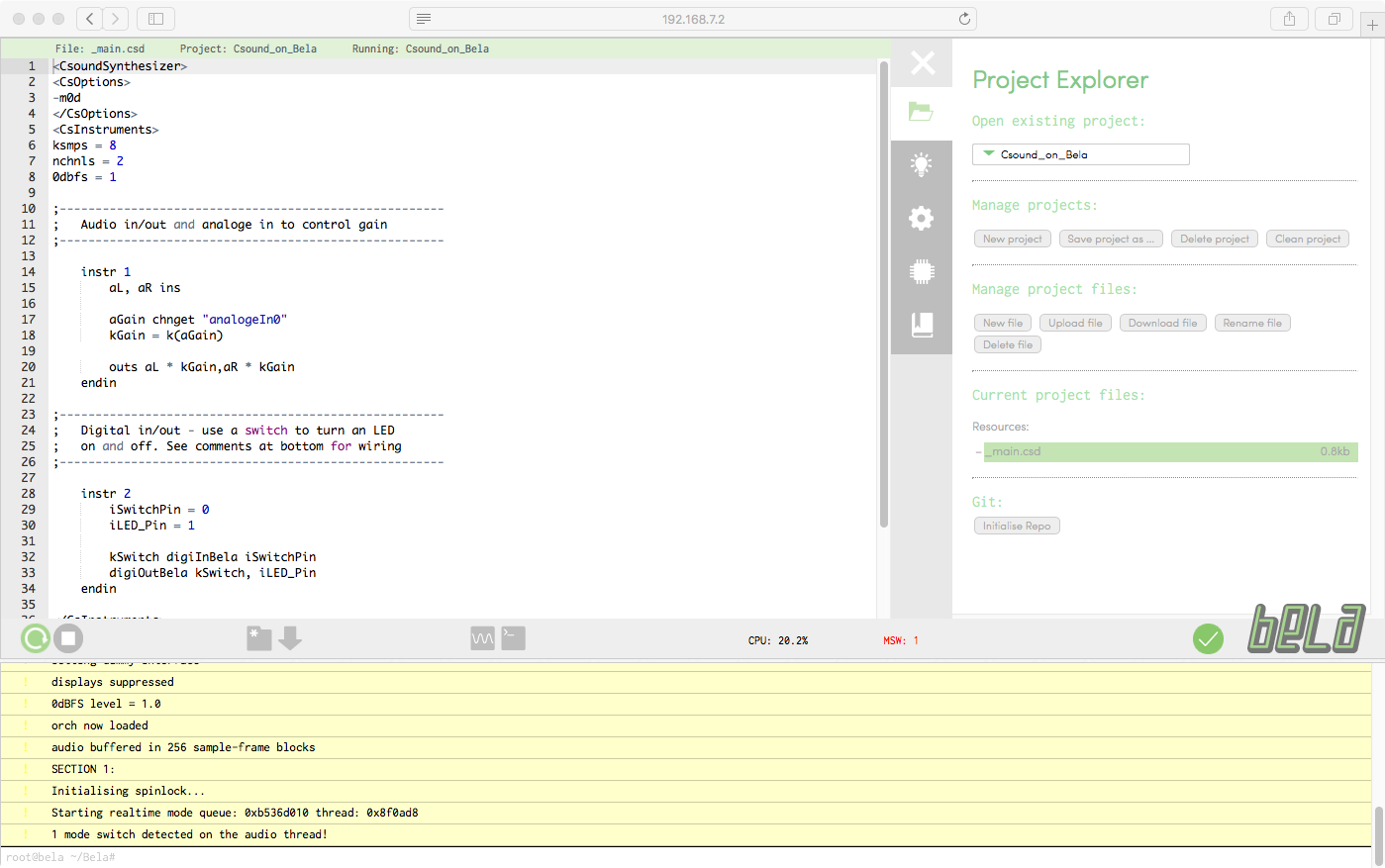 Bela inputs and outputs in Csound

To communicate with the analog channels on the Bela, we’re using the Csound channel system. The input channels are named analogIn0 to analogIn7 and output channels analogOut0 to analogOut7. To read values, we use the chnget opcode and chnset is used to write values. Note that these are a-rate channels, so a downsampling is needed if you want to use the input values as k-rate control signals

The cosmo-dsp repository comprises a library of ready-made audio effects (e.g Reverb, Delay, Distortion, Filters etc.). All effects are set up as independendant modules that can be combined to a custom setup of effects. To make it as much plug and play as possible, all arguments are also normalized (0-1) and scaled properly inside the effect so that the user can use them immediately.

To use one of the readymade effects, you first need to download the file containing the desired effect, place it with your csd file and include it using #include like this:

The name and a quick explanation of the arguments can be found in the header of each .udo file in the COSMO dsp-library (e.g. Reverb.udo ). Since all arguments are normalized, we can directly use the analogIn values to control the paramters of the effect. Here is a complete example of a Reverb effect where the dry/wet mix is controlled by a potentiometer connected to the first analog in of the Bela-board.

The same approach applies to any of the other effects found at https://github.com/cosmoproject/cosmo-dsp/tree/master/DSP-Library/Effects and you can combine them in any order.

One thing where Csound, arguably, outperforms other environments is how quick you can write a MIDI synthesizer. This comes in very handy in combination with Bela, as you can connect any class-compliant MIDI-keyboard to the USB-port of Bela, load a Csound instrument and play it like a synth.

In <CsOptions>, you can select the MIDI-device you’d like to control Csound with. As a default, the MIDI channel defines the instrument number which is called for each pressed key, this could be changed by setting massign. To avoid cpu overload by triggering too many voices in parallel, the maxalloc option allows to restrict the maximum number of voices (in this example set to 4 voices).

In a real-time audio system like Bela, accessing other hardware than the audio device (eg. printing to console, reading writing to harddisk etc.) should be avoided (although it is sometimes required during debugging). In Csound printing and other console messages can be suppressed by adding -m0d to the <CsOptions> section. Loading files from disk should also be avoided (for instance loading audio files with diskin2), but should rather be loaded into memory with function table generators (see examples below). Using reinit to re-initialize i-rate variables should also be avoided if possible as it can cause a mode switch which normally leads to a drop-out.

Example of how to load and playback a file from memory using function table and the loscil opcode (see https://csound.com/docs/manual/loscil.html for a thorough explanation)

Projects made with Csound and Bela

Based on the effects collection in the COSMO library, Alex Hofmann built a Tenor-Saxophone with integrated live-electronics. Inside the bell of the instrument he mounted a Bela board, with speaker and microphone, all powered by a regular 5V-phone charger power-bank. On the Bela board, a Csound-Patch is running that processes his playing in realtime, either by adding modulation effects or by live-sampling and playback.

The structure of the saxophone part of the 12 minute performance was chosen by an algorithm, which randlomly picks voice samples with instructions out of three categories (tempo, dynamics, tonal material). Verbal instructions such as “Fast, loud, three tones!” give cues to the player but are also hearabel for the audience. Furthermore, this setup allows the performer to move freely on stage or even walk into the audience, as all live-electronic parts are inside the saxophone. A full version of a 12 minute performance with this augmented Tenor-Saxophone at the Linux Audio Conference 2018 can be found here.

This figure shows an augmented Tenor-Saxophone setup, with Bela running Csound, an active speaker, a microphone and a 5V power-bank mounted inside the bell of the instrument. 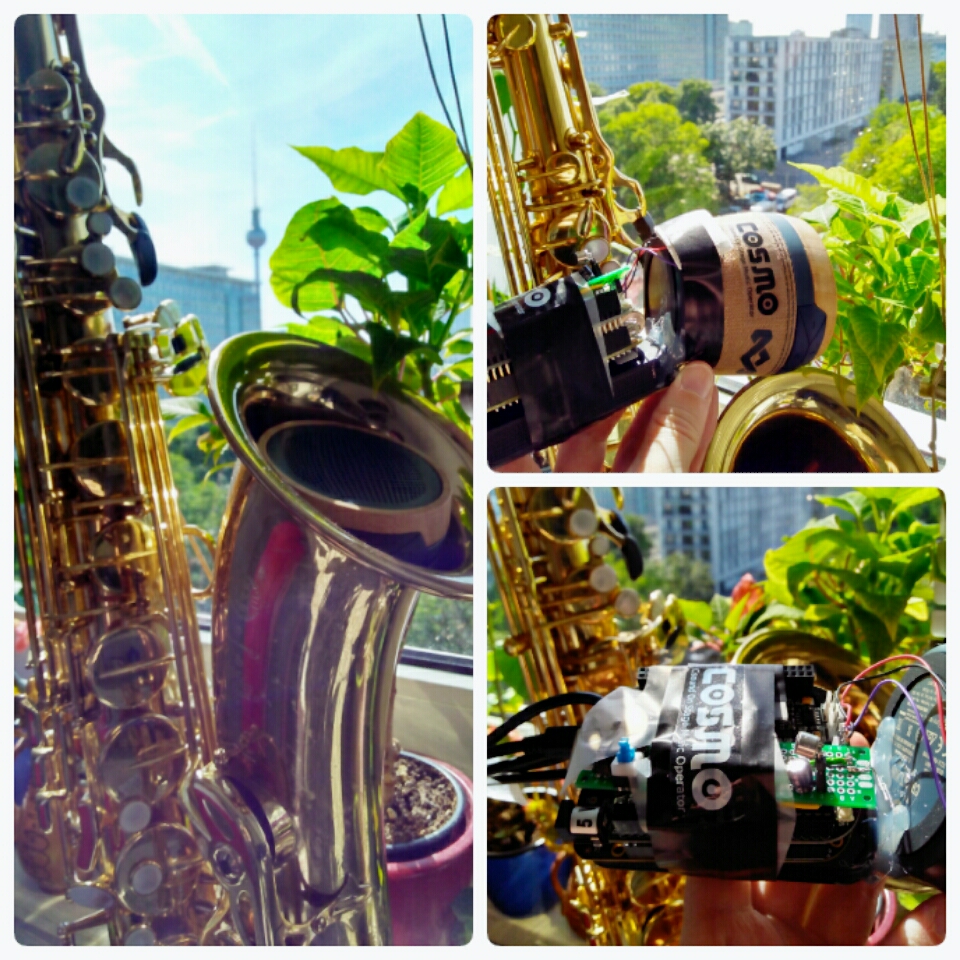 A video with excerpts from a performance with the augmented Tenor-Saxophone at the Linux Audio Conference 2018: 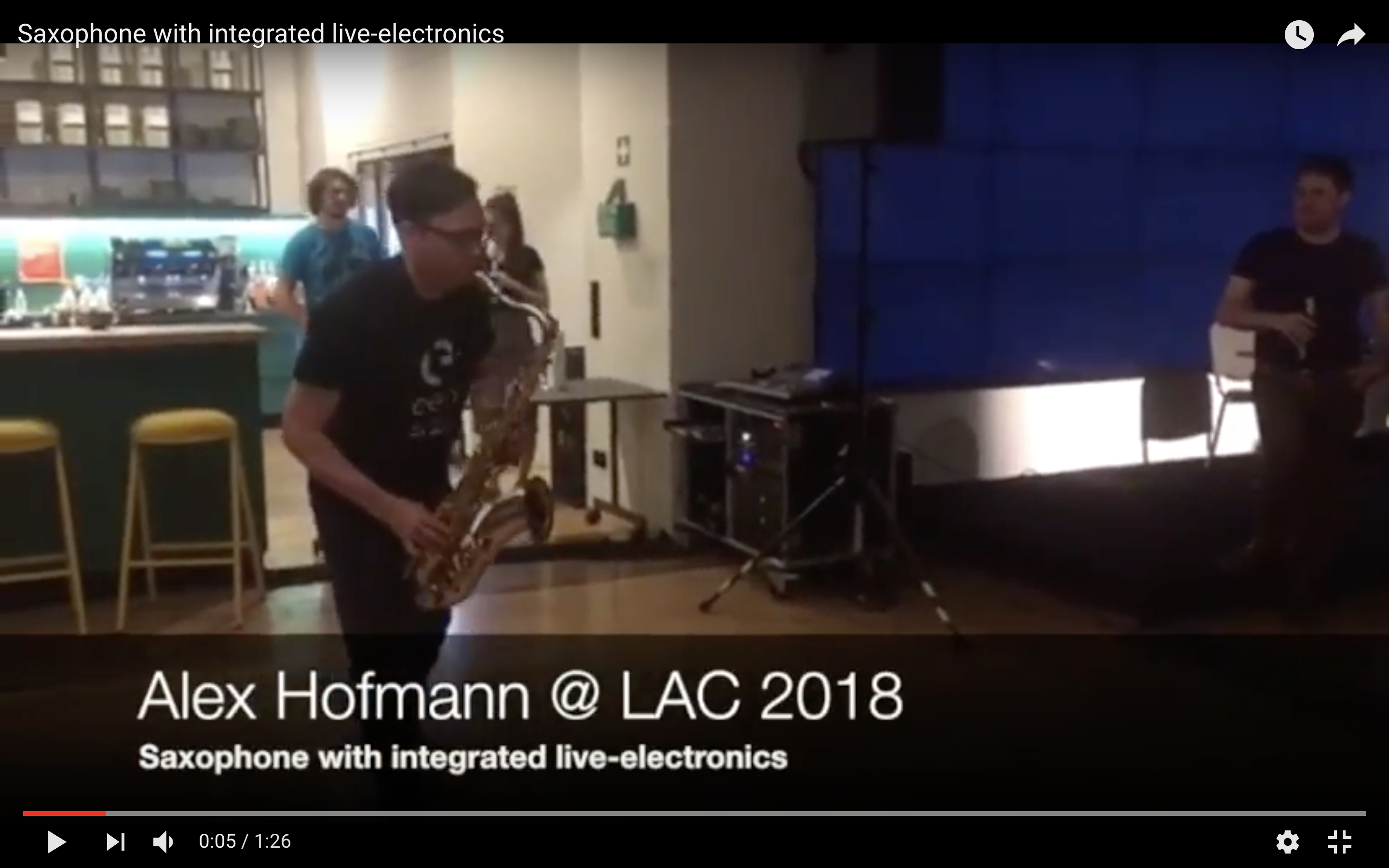 Trampeklang is an interactive sound installation for kids commisioned by Oslo Philharmonic Orchestra. It was designed and built by Bernt Isak Wærstad and Peter Baden using custom built wooden platforms with velostat material for pressure sensing and Csound for triggering and playback of different sounds (from a sound back chosen by the operator). Everything connected to and running on a Bela of course. 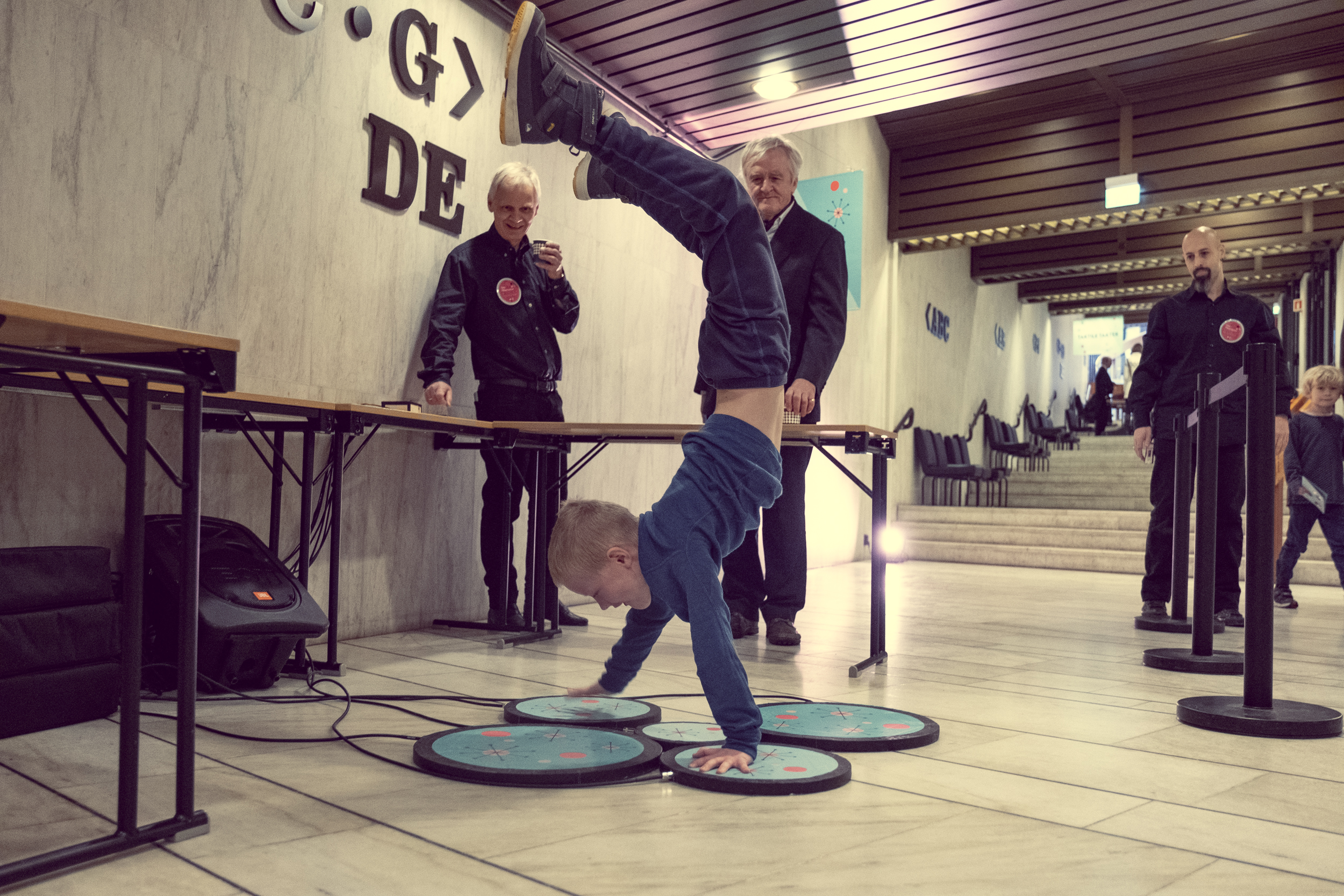 A short video showing Trampeklang in use during Oslo Philaharmonic kid’s day: 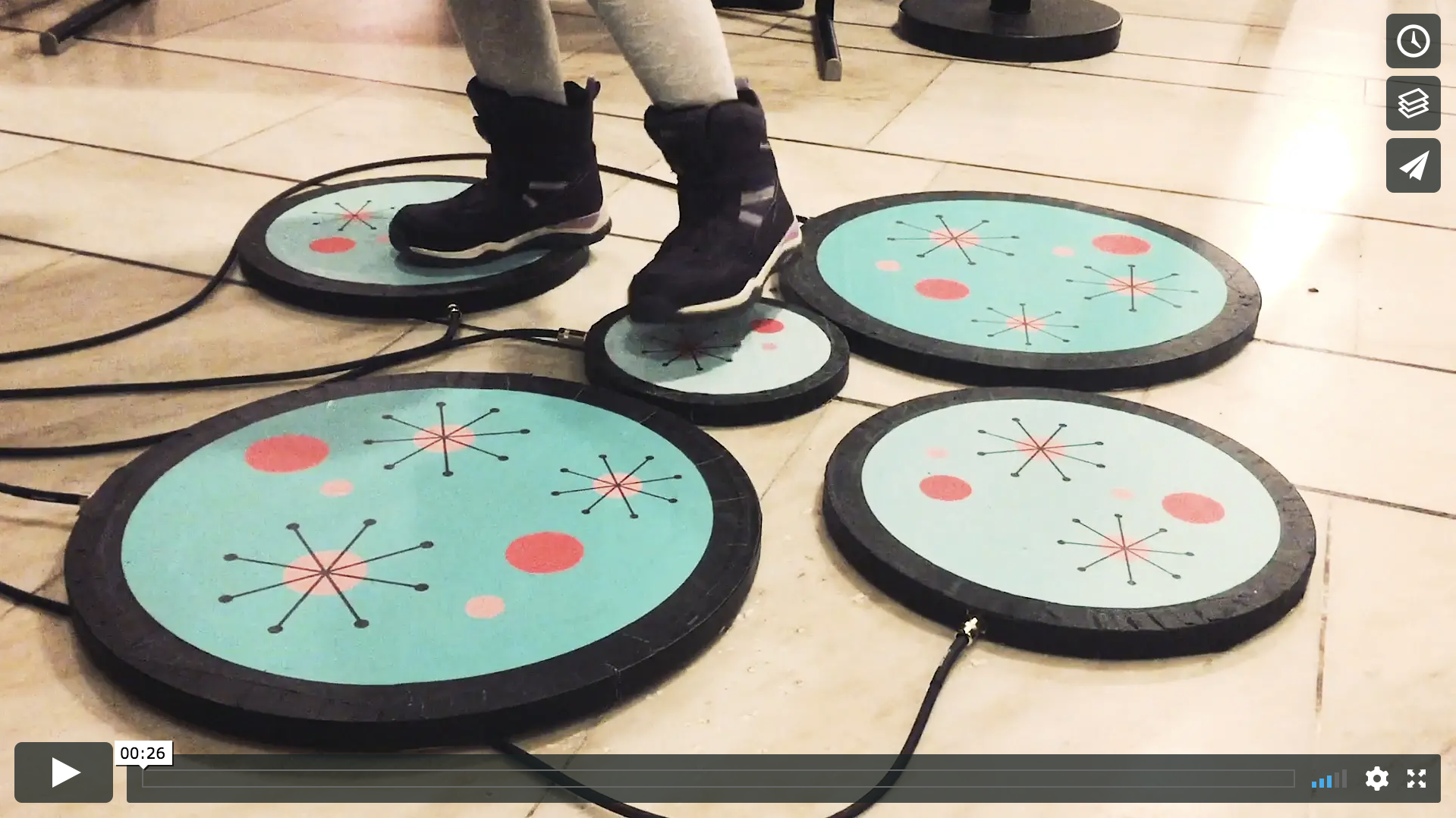 Bernt Isak Wærstad are using DIY electronics and custom processing software written in Csound (COSMO) morphed with an acoustic guitar to create a new electroacoustic instrument. Extending the traditional instrument and exploring the cross-sections between electronic and acoustic timbres. The instrument was first used for a concert at the MultiNO festival in Oslo in January 2018 and have later been presented through a performance at the NIME conference at Virginia Tech in June 2018.

Recording of Electroacoustic Guitar from MultiNO on Soundcloud

The Half-Physler is a hybrid acoustic-virtual instrument. A physical model of a tube resonator is running on the Bela Mini, whereas a clarinet reed with a bending sensor together with an actuator is used as the excitation mechanism similar to real single-reed instruments. The physical model is provided as an opcode for Csound. The performer can control the coupling between the reed and the virtual tube by pressing the reed against the shaker. A slider and potentiometers on the 3D printed enclosure allow to shape the tube-resonator in a way beyond the possibilities with real acoustic instruments, such as morphing a cylinder into a cone.

The Half-Physler was developed at the Department of Music Acoustics at the University of Music and Performing Arts Vienna were you can find more information about the project. 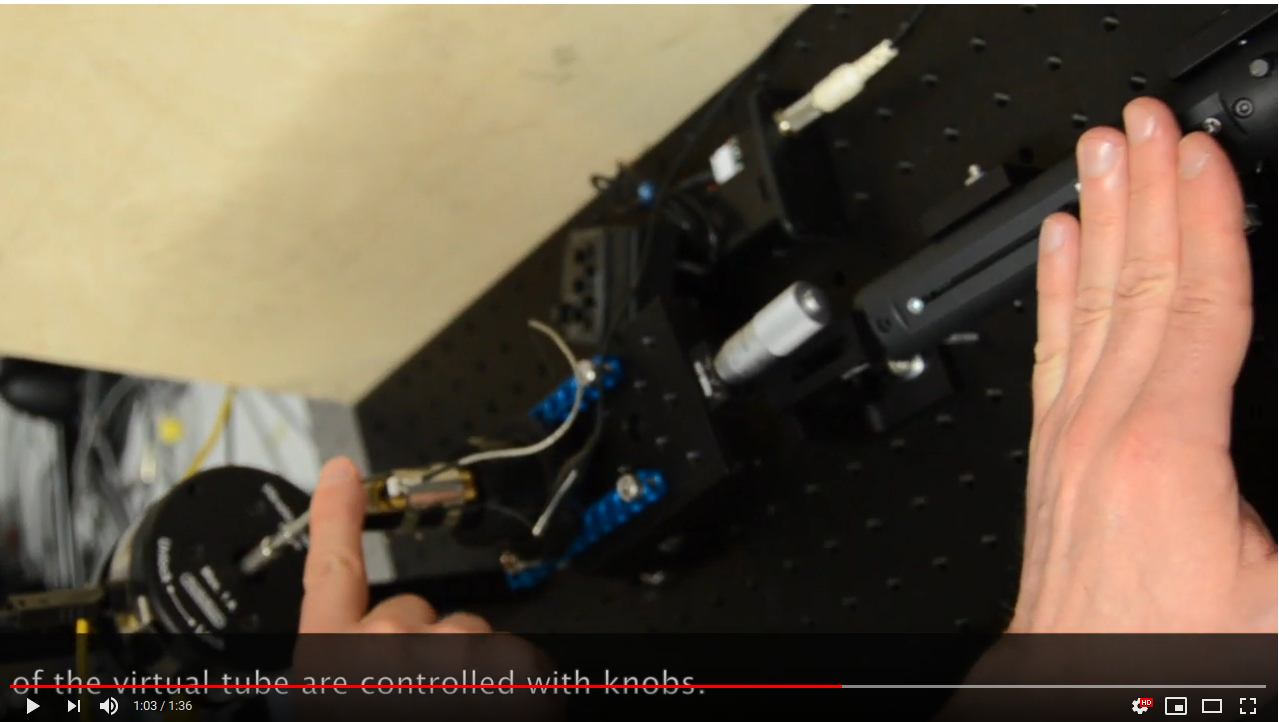